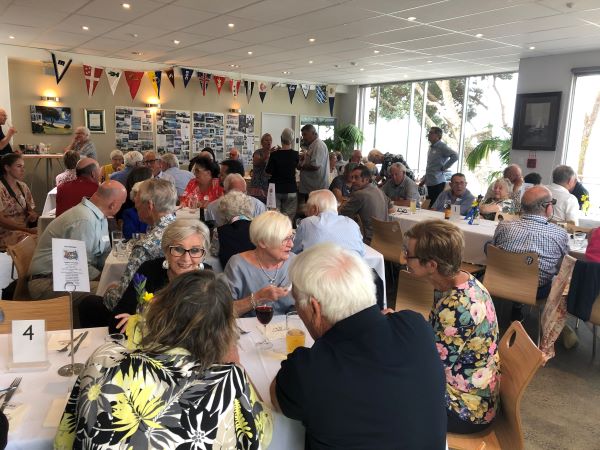 It was a relaxed and happy occasion where old friends were reunited and memories of times spent at the club were shared.

Of course the day started with watersports, with some short sprint races put on for our foiling sailors. Windfoiler Alex Hart was the winner on the day. The club's surfski paddlers acknowledged the occasion by doing what they do best- going for a paddle together before joining in the festivities at the club for a well-earned drink.

Ray Welson, chair of the Centenary Committee, welcomed everyone and spoke about the early history of the club, a reliable source being that the first meeting of the club was held at his great-grandfather Skipper Crosby's house in Baywater in 1920.

Club president Ralph Roberts followed and paid tribute to past commodores as well as talking about more recent history of the club including many of the World Championship regattas the club has hosted to have developed it's reputation as a world-class regatta venue.

Commodore Andrew Snell concluded the formalities by speaking about the future of the club and the launch of the club's new strategy to take this club into the next 100 years.

This was followed by a catered meal provided by the Spit Roast Company, which was enjoyed by all our guests as they caught up with each other and enjoyed the occasion.

Social events were held throughout the rest of the weekend, with many attending an extra special Friday club night and a BBQ on Sunday afternoon to wrap up the celebrations.
Thank you to all who attended and helped make the event so special. We hope you enjoyed it and look forward to seeing you all at the club soon.

The event could not have happened without the dedication and enthusiasm of the Centenary Committee led by Ray Welson consisting of Joan Finlayson, Penny Roberts, Mary Grant, Pam Wood, Janet Warnock, Evelyn Johnson and Ralph Roberts. These members worked tirelessly to put the event on and make it such a success.

A very special thank you to Candida Stationary, Klaus and Dagmar Giradet, for their support of the Centenary celebrations.

Check out our photo gallery from the celebrations- if you have photos from the weekend, please email them to events@takapunaboating.org.nz